Using motors with Robots in Quorum

In this tutorial, we will become more familiar with how to use the motors of the robots. The topics discussed will include:

A motor is only able to perform a single specific task: rotation. A motor can either rotate backwards (with the RotateBackwards() action) or forward (with the RotateForward() action). All robot movement is controlled through motors.

The amount that a motor rotates is measured in degrees, where a rotation of 360 degrees means the motor has completed one full revolution. Rotation can also be specified as a negative number to indicate a reverse rotation. A rotation of -360 degrees will cause the motor to complete one revolution backwards. 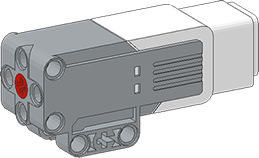 When connecting motors to the robot, it is important to note which motor is plugged into which port. The motor ports on the brick are on top and labeled A, B, C, and D. We will give instructions to the motors using these letters in our code.

Now that we have a better grasp on the basics of motors, we can explore different ways they can be utilized in a program.

With this set of actions, we can instruct the robot to move a certain amount or to move until we tell it to stop. If we want a motor to finish its rotation before the program moves on to the next line of code, we tell the program to wait for that motor to finish. The following program demonstrates these actions:

As mentioned above, the speed of a motor's rotation is measured in degrees per second. The following program shows a demonstration of how to use the SetSpeed() action.

When a program is running, information is stored for each connected motor, including what degree a motor is moving to, how far it has already rotated, and the speed at which it is moving. We can also detect stalls by asking if the motor is currently moving. Lastly, we can reset the motor's rotation information back to 0.

In the next tutorial, we will discuss Sensors, which describes how to use lego sensors.