In this assignment, you will practice the following computer science concepts:

In this assignment, you will write a program that positions images in the game window to create a scene. Download this zip folder for a template to help you get started.

Open the provided template and navigate to the main.quorum file. There are five different image files included in the project template. They contain images of a bush, a rabbit, a log, a rock, and some trees. We will use these images as well as some Drawable shapes, setting their positions in the game window, to create a nature scene.

Activity: Declare the Drawable objects we will need.

Example: Load two rectangles and a circle to Drawable objects and set their position

This assignment makes use of a texture atlas (also known as image sheets in Quorum). To get an introduction to using image sheets, refer to this tutorial . An image sheet has been provided for you in the template, called "forrest.atlas". To find this image sheet, look in the folder labeled "resources" in our project. To make use of our image sheet, we had to declare the use statement at the top of our program to let Quorum know that we want access to image sheets. Notice the statement use Libraries.Game.Graphics.ImageSheet has already been included at the top of our program. Declare an ImageSheet object in the same place we declared our other Drawable objects.

Now that we have our ImageSheet declared, we can begin using it to load images to our Drawable objects. Navigate back down to the action CreateGame action.

Example: Load an image sheet to our ImageSheet object

Once we have our ImageSheet loaded, we can use it to get images for our Drawable object. We do this by calling the GetDrawable(text name) action on our ImageSheet. Images in ImageSheet objects are named and accessed by the file name of the image minus the extension. For example, if our ImageSheet contains "dog.png" and we wanted to get the image represented by "dog.png", we get it by asking the ImageSheet for "dog".

Example: Use an ImageSheet to load an image to a Drawable

Activity: Load images to the other Drawables from the ImageSheet and set their positions on the screen.

sheet:GetDrawable("bush") returns a Drawable object with the image of a bush loaded to it. We use this Drawable to load the bush image to our bush Drawable. Each statement to load images to Drawables from ImageSheets will look similar to the above line of code. Drawables loaded from image files act the exact same way as drawables loaded from ImageSheets. Once images have been loaded to our Drawable objects, recall that the positions of our Drawables can be set by using the SetX(number x), SetY(number y) or SetPositon(number x, number y) actions. Don't forget to add the Drawables to the game so that they appear on the screen!

Now, it's your turn to be creative! Create a scene by moving the Drawable objects to different positions on the screen. Do you want the trees to appear as if they are in the foreground or the background? Do you want the bunny to be on top of the rock? It's all up to you!

Each student will produce a slightly different image. An example image is shown below. 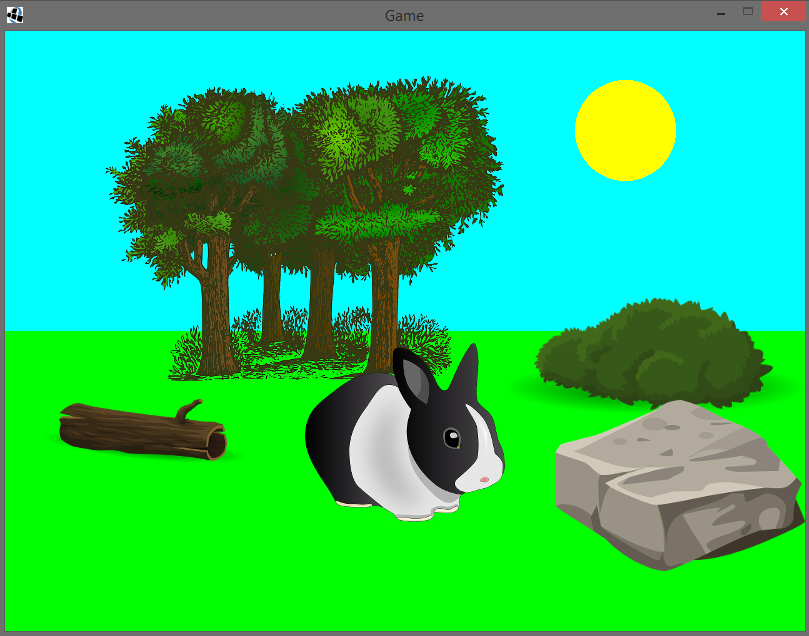 In the next tutorial, we will discuss Challenge 2.4, which describes how work Choose your own pattern in Quorum..