An Introduction to Robots in Quorum

In this tutorial, we will focus on setting up a LEGO™ EV3 Mindstorms robot to run Quorum programs, as well as discuss the fundamentals behind using Quorum to write programs for the robot. Specifically, we will cover:

Setting up the robot for to run Quorum programs

Before we can run a Quorum program on a LEGO™ robot, we have to install a special kind of software called a "firmware." To accomplish this, we need to use the robot's expansion slot, which accepts a microSD card (just like many digital cameras and phones). Not all microSD cards are supported. We need one with the following characteristics: 1) must be between 2 and 32 GB of storage, 2) must not be a SDXC type card, 3) must be formatted with the FAT32 format (you can use this official SD card formatting program to accomplish this. There are many cards we can buy, but we have generally had luck with this card from Kingston. A teacher in Nebraska that creates fully loaded cards as well.

The next step is to install the lejOS firmware on the compatible formatted microSD card. Download the lejOS install files by pushing the button below and then extract the contents onto the SD card. Download the LEGO™ Robotics Installation Kit for Quorum, version 1.3 Make sure that the contents of the zip file are directly on the SD card and not in a folder. It should contain the following items (or similar ones) directly:

The SD card's contents should look similar after the files are extracted:

With the files on the SD card, we can now install the lejOS firmware on the LEGO EV3 brick, which is the central part of the robot that everything connects to. To do this, we need to locate the slot on the side of the brick labeled "SD" and insert the card, as shown here:

After the card is inserted, we turn on the robot by holding down the center button found on the front side of the brick, as shown here:

In about a second, the LED light surrounding the robot's buttons should display a red light, indicating that the robot is starting up, as shown here: 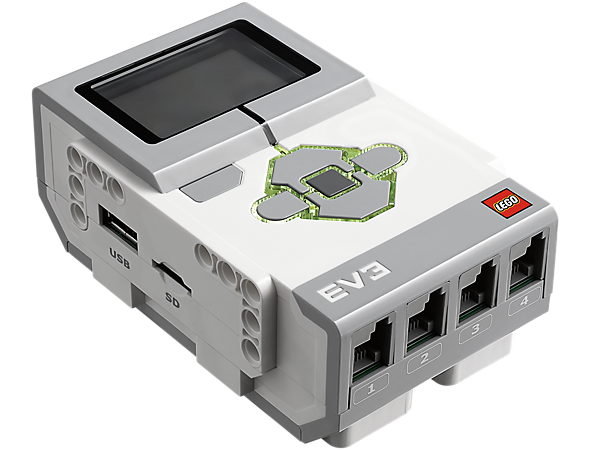 After this occurs, we let go of the button and the robot should start installing the lejOS firmware automatically. Typically, this process takes a few minutes. When the installation finishes, the robot will play a three tone piano jingle. The robot is now ready to run Quorum programs. We can explore the menu on the brick and change settings at this point. The left, right, up, and down keys navigate through menus, while the center button is used to select an option, and the escape button (top left) goes back. Next, we will learn about making Quorum Robot projects.

Using Quorum Studio, we can create a Quorum program from a template designed for a robot. Installation help can be found on the getting started page. To create a robot project, choose New Project from the File menu, select LEGO from the categories section on the left and "then choose either of the projects below it. When this is done navigate to and press ok or hit return.

We now have a project loaded for constructing LEGOs and below is a screen shot of what our application will look like now once we open the source file. Many tutorials for Quorum go over the code for running various applications, like robots, but in this one we are not going to discuss code. Instead, we are going to move to running our application. Running a Program on the Robot

In order to transfer a program from the computer to the robot, we need to take the following steps:

The robot should perform the instructions in the program. The LEGO brick's screen displays three different files: QuorumStandardLibrary.jar, QuorumStandardPlugins.jar, and Default.jar, in that order. These files are needed to run Quorum programs on the robot. Do not delete or change these files. If you do not see all of them , rebuild your project and they should be automatically transferred.

Finally, there are a number of additional ideas about running a robot it is good to be aware of. First, A running program can be stopped at any time by pressing the center and down buttons on the brick at the same time. Second, to turn off the robot, press the escape button on the home menu and confirm the shut down by pressing the right button and then the center button. Third, we can change a Quorum project's type at any time, by adjusting its project properties. For example, we can change the name generated from Default to something of our own choosing. Finally, for a complete list of actions available for the robot, please refer to the documentation for all Quorum libraries and search for the package Libraries.Robots.Lego.

Note: If your LEGO robot connects normally to your computer, skip this section. You do not need it.

In testing, we have noticed that some Windows machines have difficulties installing the appropriate software for the LEGO robots (called "drivers"). We did not write this software, nor do we control Windows' approach for installing drivers, but in the unlikely case that your computer does not appear to connect to the LEGO robot, we have found that these steps seem to resolve it:

If, for whatever reason, your school has difficulty with getting your LEGO robot up and running, we highly encourage you to send a message to the Quorum Google Group and ask for help.

In the next tutorial, we will discuss Motors, which describes how to use lego motors.