This tutorial teaches you how to play audio files in Quorum.

An Introduction to Playing Sounds in Quorum

This tutorial will explain how to add and manipulate sounds by using the Quorum Audio library. In order to access the Audio library, we must include the use Libraries.Sound.Audio statement at the beginning of our class definition. The Quorum Audio library supports files with either .wav or .ogg extensions.In order to use sounds, we first need to place a copy of the sound file into our project. It does not matter where in our project we place it, but for this example, we make a new folder in the main project folder called "Sounds." It is placed next to the folder labeled "Source Code."This looks like so: 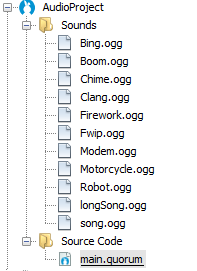 To make things easier to get started in this tutorial, a project containing many different sounds has been provided in this zip file.

You may have noticed that when we have a sound that lasts longer than a few seconds, our program ended before the sound finished playing. If we haven't prevented the program from finishing before our sound is done playing, our program will end before the sound is done and it will cut off. A simple remedy for this is to use the PlayUntilDone action to play our Audio object instead of using the regular Play action. Be aware that any statements after the call to PlayUntilDone will not execute until our sound is done playing. An example using the PlayUntilDone action is below.

In the next tutorial, we will discuss Changing the Audio: Controlling Volume and Pitch, which describes how to play audio files Quorum.