In this lesson, students are formed into groups of 5-7 and given string so they can connect themselves together to form a computer network. Students are given several specific networks to form, along with several guidelines for how to best form computer networks. Students are also forced to wrestle with conflicting guidelines in determining the 'best' way to connect together to form a network, and will need to justify why they chose the networks that they did.

Students will be able to:

The physical activity in this lesson helps provide a memorable experience and personal anchor for the rest of the unit - we can refer to the networks created in this activity to help motivate concepts in later lessons. In the final challenge for this lesson, it is important to let students wrestle with how to best balance the 3 network guidelines and refine their reasoning & explanation for decisions they made when creating their network. This is important in setting up later lessons in this unit - in this lesson, the guidelines are based on the physical impacts of creating a network but towards the end of the unit students will examine the societal and economical impacts for creating computer networks and will again think critically about how to balance several factors from a societal and economic lens.

Discussion Goal: Direct the conversation towards the need to be able to talk to multiple people and the need to have a backup if that wire is damaged or unable to transmit information.

Group: Place students in groups of 5-7. Give each group string according to the following chart:

Challenge: As a group, create a network where everyone can speak directly to everyone else.

Guideline #3: Strings cost money, so try to use the least number of strings possible.

Challenge: As a group, create a network that uses the least number of strings.

Guideline #4: Strings can be cut, which might disconnect people from the network.

Challenge: As a group, create a network that keeps everyone connected even if any line is cut.

Challenge: As a group, create a network that you feel balances all 3 guidelines. There are many possible answers to this as long as you have a reason for why you created the network that you did.

Teaching Tip: The first 3 challenges have very direct solutions with most networks in the class looking nearly identical: 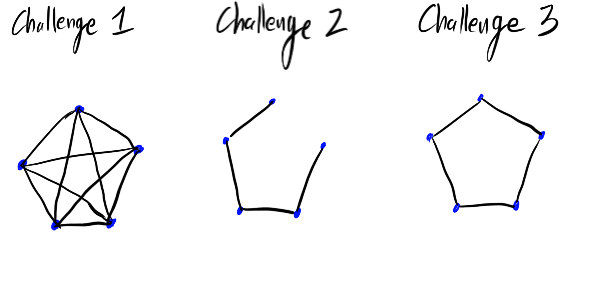 There are many possible answers to Challenge 4 so its important for students to think critically about why they made the choices that they did. They can think of Challenge 1 and Challenge 2 as the two extremes - too well connected and not connected enough - and their network finds a balance somewhere in the middle.

You may choose to have groups draw their networks on a sheet of paper and write their responses along with their network drawing. This can help students process their thinking, and can act as an artifact for reference throughout the unit.

Do This: Share these vocabulary words with their definitions (students do not write these down yet):

Discussion Goal: Students should discuss in pairs how to describe today's activity using the new vocabulary from this unit. They should make the following connections between these words and this activity:

Question: Describe two different paths that a message could take from Person A to Person D: