An Introduction to ScrollPanes in Quorum

In this tutorial, we will learn how to use ScrollPanes in the Quorum Game Engine. ScrollPanes are interface tools which allows users to look at portion of a large region by use of a smaller pane and then navigate that region to change what part of the region they see by use of scroll bars. For example, the webpage for this tutorial is a ScrollPane with a vertical scrollbar and can be scrolled up or down to display only a portion of the webpage. In this webpage example, the pane would be the area of the window where the webpage is displayed, and the region would be the entire webpage.

For this tutorial, we will create a ScrollPane that only displays a small portion of a much larger region, with Buttons located at the center and each corner of the region. Thus, the user must navigate the region using the vertical and horizontal scrollbars to find each Button. To start, create a new Game Application project.

In order to use a ScrollPane, we must include the ScrollPane library. In addition, we will need the libraries for Color, ManualLayout, and Button, requiring the following use statements:

Since we want the ScrollPane to be usable as soon as the game begins, we’ll add our code to the CreateGame class. To start, we’ll simply declare the variables we’ll be using. We also need to set our game’s layout so the ScrollPane will render to the screen. We will need a ManualLayout, which we will set immediately, a ScrollPane, and a Color variable, giving us the following lines of code:

If we were to run the program now, there would only be a Gray region in the center of the game window. You might be able to scroll through it due to the default size of the region, but you will find nothing in it. This is because we have not added anything to the region, and we will do that now by making the buttons that will be on different positions on the screen.

Before we begin with the main class, we will create a Behavior class for our Buttons, which we will call "ButtonBehavior.quorum." This class will use the libraries for Behavior, BehaviorEvent, and Speech. We need the Item library because we will be using the GetItem action from the BehaviorEvent.

The ButtonBehavior class will inherit the Behavior class and in the Run action, we need to have the program output and say the button's name. To get the name we use GetItem action from event and since it returns an Item, we save it to an Item variable. For this example, we do not need any casting because the GetName action from the Button is inherited from the Item class.

This gives us the completed ButtonBehavior class as follows:

Now with a behavior for the buttons made we can go back to the main class and add our buttons. You can start by adding these declarations:

Before we add our Buttons to the ScrollPane, we’ll make a behavior object for all of them to have set and we will set their names. This is done with the following lines of code:

Now that our Buttons are created, we can add them to the ScrollPane with the following code:

Finally, we will call the FitRegionToContents action to automatically resize the region to fit all that we added to it. For example, we used "topRight:SetPosition(2000 - 100, 2000 - 30)" to place our topRight Button. Thismoves the Button to the (x, y) coordinate of (1900, 1970). So, FitRegionToContents will make the region for the ScrollPane extend to (2000, 2000) since it will also account for the size of the button. The call will look like this:

Now when the program is run, it has a ScrollPane showing only a 600 x 400 portion of the 2000 x 2000 region. Thus, the scrollbars can be used to display other parts of the 2000 x 2000 region. For example, below is an image of the ScrollPane at the top left of the region and near the center of the region. When a Button is activated, the program will output and say its name aloud. 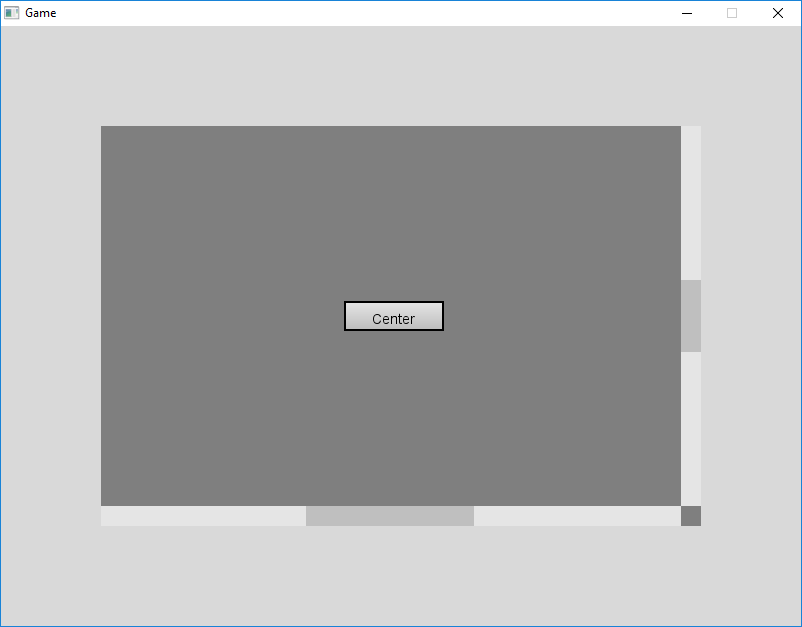 By using 500 in our calculations instead of 2000, we've shrunk down the area containing all five buttons by a factor of 4. If we were to run the program now, the vast majority of the region for our ScrollPane would be unnecessary. As such, it is reasonable to shrink down the region itself to match our Buttons. Fortunately, Quorum allows you to manually set the region size, using the ScrollPane's SetRegionSize action with a width and height. Thus, we will add the following line:

Lastly, to fit the ScrollPane to the middle of our game window, we will add the following line of code:

Now, when we run the program, the area is much smaller, as shown in the following image: 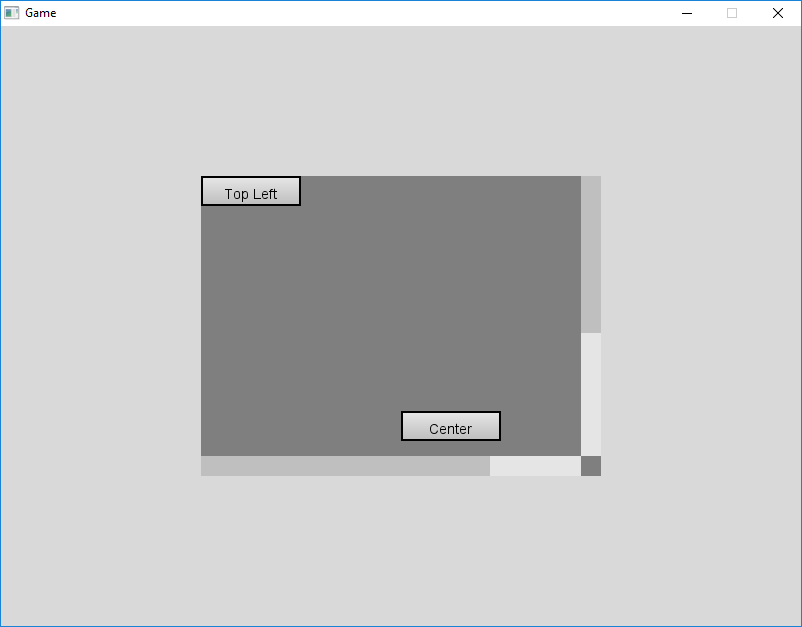 In Quorum, ScrollPanes have an additional tracking feature: indices. An index is simply an integer, starting from 0, associated with an object added to the ScrollPane. In the previous section, we added our Buttons to the ScrollPane without indicies, which simply gives an index in the order that objects were added. For example, since topLeft was the first thing we added, it has the index value of 0. Similarly, bottomLeft was the fourth thing we added, so it has the index value of 3. We could have also used the Add action with an index specified, in the form of "scrollpane:Add(0, topLeft)." For example, the following Add actions would have given us the same indicies as the section above:

As for specifying a previously assigned index, the new object will push the preexisting object, and everything following it, up by 1. For example, consider the following Add actions:

In this case, the order of events is as follows:

In particular, indicies are used to remove objects from ScrollPanes. For example, if we wanted to Remove the Center Button using the previous example, we could either use "scrollpane:Remove(center)" or "scrollpane:Remove(3)." While we just call the Remove action like this, note that the Remove action with an Item parameter will return a boolean, True if the item was in the ScrollPane and successfully removed or False if the item was not in the ScrollPane. The Remove action with an integer parameter will return the Item that was previously contained at that index.

The action of removing an object also has an impact on the indicies of other objects, though in this case, it will change the following indicies by 1 to fill in the space left by the removed object. Using the previous example again, consider the following Removes:

In this case, the order of events is as follows:

In the next tutorial, we will discuss the Focus, which describes how to use the Focus.